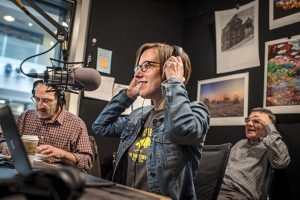 In March 2018, my colleagues and in the McCourtney Institute for Democracy at Penn State launched a podcast called Democracy Works that examines what it means to live in a democracy.

We were not quite sure what we were doing, but decided to take the plunge anyway — and I am so glad we did. With the help of WPSU Penn State, central Pennsylvania’s NPR station, we took the show from idea to launch in just three months.

We now have listeners in all 50 states and 165 countries. The show won a CASE Circle of Excellence Award in 2020 and a People’s Choice Podcast Award in 2018. The show has grown more popular than I ever thought it would and it’s opened my eyes to the power that podcasts can bring to higher ed and vice versa.

At the beginning of 2020, I teamed up with a group of like-minded podcasters to launch The Democracy Group, a network of podcasts that examines what’s broken in our democracy and how we can work together to fix it. The network now has more than a dozen shows and continues to grow through cross-promotion and external partnerships.

My most recent podcast venture is eight-part narrative series When the People Decide, which explores how ballot initiatives and the people who organize them have shaped American politics and policy. It features powerful stories of people across the country who have used the initiative process to create political change by bringing issues they care about directly to their fellow voters.

Outside of democracy, I’m a host and contributor to the New Books Network, which features interviews with scholars about their work in a variety academic disciplines. The network has more than 50 discipline-specific channels; my contributions fall mainly in journalism and media studies. Here are a few of the episodes I’ve done:

I’ve been fortunate to combine my interests in writing and podcasting to share what I’ve learned with the broader podcast community. Here are a few recent articles: